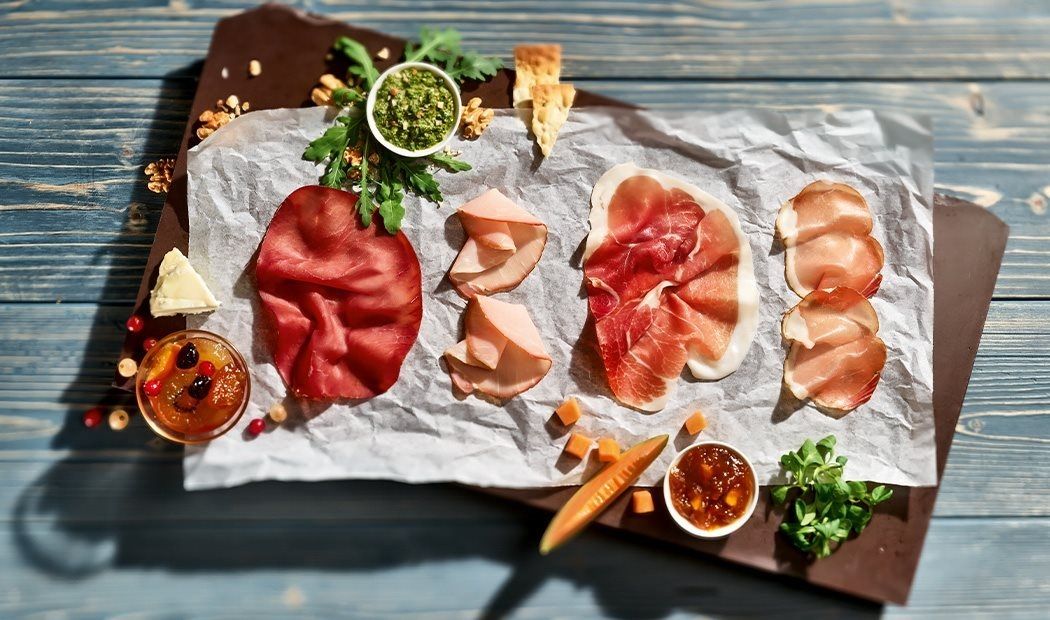 Rocket pesto
Rocket pesto is a flavoursome, fresh sauce which brings a touch of personality and innovation to the Board of delicate deli meats capable of enriching the suave flavours of the deli meats making it up.

Melon mostarda
Wonderful recipe boasting an intoxicating smell and a warm colour. It brings a touch of summer to the Board of delicate deli meats, originating an encounter which finds its origin in the tradition and its destination in the innovation.

Red berry mostarda
This mostarda with an intense, delicate flavour accompanies the Board of delicate deli meats along a sensory path of sublime delicacy.

SAN DANIELE DOP CONTESSA
Prosciutto obtained only from the best legs branded San Daniele. Matured 18 and 24 months, it gives an intense aroma and a fully-developed, composite flavour with a stronger aftertaste.

MATURED PORK LOMBETTO
Deli meat which can be recognised for the almost total lack of fat parts. Clue of the quality of this delicious deli meat is its texture, which becomes tougher once the maturation period is over. Delicate aroma, flavour which gives a tasty aromatic quality.

SMOKED FILONE
Very lean Levoni speciality seasoned in brine and hot smoked in vertical smokers with a selection of woods of Trentino. The outcome is a mouthwatering, flavoursome, appetising deli meat which shows soft, red-pinkish slices when sliced.

BRESAOLA MEDAGLIA D’ORO
Deli meat which originates in the Canton of Grisons in Switzerland in a far-distant time. Its aroma and delicious flavour stem from juniper berries, thyme and bay leaves used in its processing.